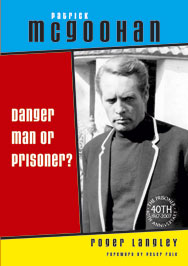 Foreword by Peter Falk
FEATURING OVER 450 RARE AND EXCLUSIVE PHOTOGRAPHS

Patrick McGoohan changed the history of television with his landmark series The Prisoner. Many TV series since have cited The Prisoner as an inspiration, including Lost. But there is a lot more to McGoohan than The Prisoner. This renowned actor has an impressive CV of stage, screen and TV productions, and is often declared to be one of the best actors to have ever come out of Britain. Yet, his obsessive protection of his privacy and the often conflicting and provocative remarks made to the press over the years have created a need to set the record straight. This first ever biography of McGoohan does just that. It chronicles a career that begins on the Sheffield stage and ends with international stardom. The book details McGoohan’s classic television series Danger Man and The Prisoner; it explains why McGoohan was top choice for James Bond, and why he turned down the role ; it explores the impact he had on both actors and directors he has worked with; and highlights McGoohan’s friendship with Peter Falk (who has written the foreword for this book) which has gained him two Emmy Awards.

In Patrick McGoohan: Danger Man or Prisoner?, Roger Langley unravels the myths, separating the man from his on-screen creations. McGoohan attracts thousands of admirers around the globe and this book reveals why!

“McGoohan was the Orson Welles of British television. A radical; an enfant terrible. He had total control and created something truly extraordinary. So, of course, they closed him down!”
Donovan

“This must be for McGoohan fans – that most eagerly awaited of all books. A biography. And what a biography! This well structured work glitters, every page well composed, literate, and absorbing, every fact meticulously researched and detailed. Does this work do justice to this most private and retiring of actors? The answer is an emphatic ‘Yes’ … McGoohan will even be quietly pleased.
Believe me, this is a book that you’ll certainly be reaching for, again and again. Don’t think twice.”
David Barrie – Founder of the Prisoner Appreciation Society