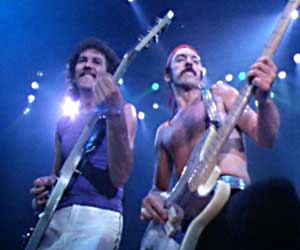 To be informed about the release details of this book, and also future publications, you will need to sign up to our Newsletter. We will only contact you very occasionally with information about our forthcoming publications. Thanks.

In 1983, rock superstars Saxon were at the height of their popularity. Hit album followed hit album. American actor Harry Shearer arranged to join the band for several days, researching material for his next film, which he was also co-writing. Lead guitarist Graham Oliver and bass player Steve Dawson regaled Harry with dozens of hilarious, but true stories of life in a rock and roll band. And Harry Shearer took one look at Dawson on stage and thought “That’s it! Open tune the guitar so that you can raise a fist in the air while playing power chords.” Harry played bass player Derek Smalls in the now classic film This is Spinal Tap. The character was heavily influenced by Steve Dawson, and numerous stories told by Dawson and Oliver found their way into the film.

But hundreds of other stories, equally worthy of Tap, remained untold – until now. Oliver and Dawson give the hilarious low-down on Metallica, Motley Crue, Slade, Ozzy Osbourne, Motorhead and dozens more classic bands – a low-down that only insiders can relate. Many of those talked about here make their own contributions to the book, making SAXON Drugs and Rock and Roll the most anticipated book on rock music in recent years.

Illustrated with never before seen photos, SAXON Drugs and Rock and Roll will both shock and amaze.

THIS IS THE FUNNIEST AND MOST HONEST BOOK ON ROCK MUSIC YOU WILL EVER READ!