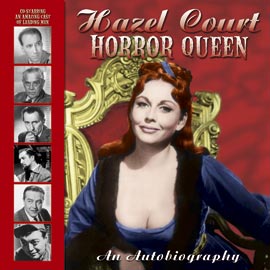 An Autobiography by Hazel Court

International star Hazel Court has been described as the “Ultimate Scream Queen”, due to her work with both Hammer Films and Roger Corman. She is the only actress to have worked with all of horror films’ leading men – Boris Karloff, Peter Cushing, Vincent Price and Christopher Lee. But Hazel Court is so much more than a Scream Queen! She was one of England’s top film actresses in the 40’s and 50’s as well as one of the world’s most popular pin-ups. Hazel went on to have a high-profile career in US television in the 60’s (Alfred Hitchcock Presents, Bonanza, Dr. Kildare, Rawhide, Mission Impossible, The Twilight Zone, Burke’s Law, The Wild Wild West, and many more). Her autobiography traces her path from her childhood in the West Midlands of England to Lake Tahoe, California; from famous actress to internationally acclaimed sculptor and artist. Hazel provides a unique and emotionally moving view of an English woman’s life in Hollywood. Lavishly illustrated with 200 rare photos – including some that you never thought you’d see! This is a book to cherish!