THE BATTLE FOR BOND: The Genesis of Cinema’s Greatest Hero
by Robert Sellers 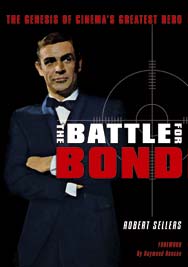 The First edition of The Battle for Bond was withdrawn in March 2008 following persistent threats of legal action from the Ian Fleming Will Trust. The first edition included a very small number of the documents used in evidence at the Fleming plagiarism trial, which we believe we had the right to reproduce. The Fleming Trust disagreed, claiming that the documents were their copyright – a fact that we never disputed, but we believed that their use in the context of this book fell under several exclusions in the Copyright Design and Patents Act.

Reproducing these documents in any event was not critical to the book, and the documents themselves were of no great significance. So we were surprised at the threats from the Ian Fleming Will Trust, who could have asked for the small payment their use would have incurred or simply an acknowledgment of their ownership in the next edition. Instead, they wanted the book removed from sale – literally banned over this small and insignificant matter. They were unwilling to discuss any other course of action but the banning of the book. Their behaviour left us with the impression that they were attempting to ban the book largely due to the fact the Ian Fleming plagiarism case was something that they did not want publicised, particularly in the year of the Fleming centenary.

We could have fought them in court, but we are no match for the bottomless pit of money they were apparently willing to invest in this matter, so we took the commercially sensible decision to deliver the remaining UK stock of the book to Olswang, their solicitor’s offices in London.

The banning of the book created intense media interest in the book and the Fleming plagiarism case, and as a consequence of this renewed interest, we soon will be publishing a revised and updated new edition of the book, which we would not have done had the Ian Fleming Will Trust not intervened. As our friends at Cinema Retro magazine have concluded:
“It’s hard to fathom what the Fleming estate hoped to gain by these actions. They’ve taken a low-profile book and given it enormous exposure. Sellers was not uncovering a scandal: the courtroom case involving Fleming was major news at the time and has been extensively covered in every biography of the author. For the sake of trashing 300 copies, they have insured that the book will now be highly-sought by readers who might otherwise would have never known it existed.”

The story was also covered by Bookseller Magazine, the Sunday Times and the BBC. To watch the BBC coverage go to:

Tomahawk Press and the author, Robert Sellers would like to acknowledge the overwhelming support we have had from the James Bond fan community, to whom we say thank you.