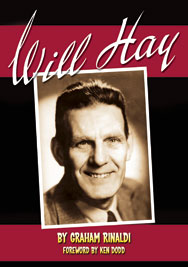 Graham Rinaldi is to be congratulated for capturing the essence of Will Hay’s greatness in this wonderful text book of Tickleology. It is a worthy tribute to a sublime comedian, an excellent actor and a great entertainer.
Ken Dodd

A meticulously researched and richly entertaining biography of one of the most popular and influential comedians Britain has ever produced.
The Daily Express

Every British comic actor that followed Will Hay owes Hay a debt of gratitude – for it was Hay who defined the modern essence of British comedy. Working closely with Hay’s family, Graham Rinaldi’s definitive tribute to the respected comic actor, takes a close look into Hay’s on-screen and off-screen personae. Drawing upon Hay’s own writings; – newspaper articles, notes from his astronomy observations and pilot’s logbooks and extracts from his unfinished and previously unpublished autobiography I Enjoyed Every Minute – the book gives a unique insight into Hay’s childhood, his continuous thirst for knowledge and his passion for aviation, astronomy and comedy.

The book is illustrated throughout with previously unpublished photographs from Hay’s family albums including a rare photograph of Hay with Amy Johnson, plus memorabilia from his performing career. Extensive research into Hay’s stage work includes extracts from his original Fourth Form at St Michael’s sketches, The Will Hay Radio Programme and, for the first time, from all of his revue and variety shows including Nosey Knows and Moonstruck for Fred Karno.

Each of Hay’s 18 films is examined, with insightful information regarding their production, written extracts from deleted scenes (including for the first time in their entirety the missing sequences from Ask a Policeman,) previously unpublished stills and interviews with those who worked with him from Val Guest, Leslie Gilliat and Roy Ward Baker to Dame Thora Hird, Barry Morse and Googie Withers.

Did you know that in addition to creating the mould for British comedy, that Hay was an accomplished astronomer, linguist and pilot? No? Then you must read this book about one of British film’s most fascinating characters!