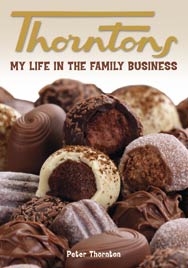 This is the frank and honest story of the Thorntons family and its confectionery Business. It’s the story of the building of one of Britain’s premier brands by a family that was frequently at war, the battle of the generations and of sibling rivalry. A family that was at the same time highly creative in a chaotic way and a younger generation that was determined to expand and exploit the opportunity despite the stringent and restrictive control held by the older generation, Norman and Stanley Thornton until their deaths. Nothing is held back, the good times, the bad times, the successes, the failures, the conflicts, the battles, the love affairs and the moments of high elation and deep depression.

Peter Thornton, Ex-Chairman of the family business reveals with startling frankness his career in the business starting full-time in 1956, through to his dismissal from the company in 1987 after a 35 year career which had been very successful. It was a dismissal which seemed to be entirely a result of family politics and jealousies and nothing to do with performance – a dismissal resulting from a boardroom coup that tore the heart out of the Thornton family.
Thorntons began in Sheffield in 1911; a business started by Joseph William Thornton who opened the company’s first shop at 159 Norfolk St in Sheffield with Peter’s father Norman Thornton as the manager at the age of 15. The book describes the family at that time, their battle for survival through problems of illness and the death of the founder, period descriptions of old Sheffield, the struggles of the family and the business to survive and grow through two World Wars, recession, depression and the General Strike. Thorntons became the premiere confectionery brand in England. But along the way were family betrayals, suicides and extra-marital affairs.

After the boardroom coup of 1987, Peter Thornton had to rebuild his life. He had been groomed from birth to run the family business, and had to start all over again. But he never lost his love for and interest in the family business, which became a public company, and changed beyond recognition. Peter explains where things went wrong and where he thinks the future of the company now lies.

Themes of destructive and dysfunctional personal relationships, conflict and emotional difficulties are candidly covered. And there is a strong feeling of nostalgia for old times and the traditions of the old business. The moral is that success and money can come at a horrible price – even to one of Britain’s best-known brands.

“A gripping family saga, packed with enough tragedy, triumph and conflict to make many novelists green with envy. Forget any thoughts you had of a dry business memoir – this is a man with a remarkable story to tell, and the skill to do it.”
Stephen Booth – International award-winning author of the Ben Cooper and Diane Fry crime series
www.stephen-booth.com