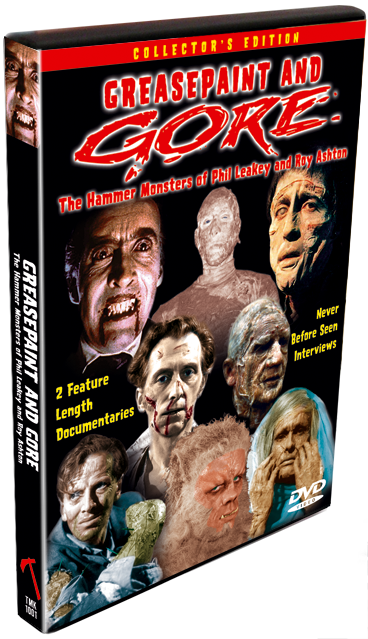 The 2 documentaries cover the following films:
Stolen Face, The Quatermass Xperiment, Quatermas 2, X the Unknown, The Curse of Frankenstein, Dracula, The Man who could Cheat Death, The Mummy, the Curse of the Werewolf, Evil of Frankenstein, The Gorgon, Dracula – Prince of Darkness and She

Technical note: This DVD is in Region 0 format, so it will work in ALL DVD regions, it comes in NTSC format, most equipment can operate on this system but please check your DVD player and TV’s compatibility before ordering.

Special DVD & book offer: Buy The Greasepaint and Gore Book and DVD together for only £15-99

“Any Hammer enthusiast will find these discussions gripping.”
DVD Drive-In

“One of the things I think people feel, obviously very strongly about is the fact that we did these films in those days very much as I have said shooting in the dark. They became world famous still are and they have enormous appeal to this day.” Christopher Lee

“Phil had to create an entirely new make-up for The Curse of Frankenstein because we were told we couldn’t – although the book was in public domain and everything – we couldn’t have anything vaguely resembling the Karloff make-up. Quite honestly if Universal hadn’t said that we would probably have gone completely differently and made a monster similarly to the Karloff monster, but we couldn’t do it so we had to make something completely different.” Jimmy Sangster (Screenwriter)

The Birth of Special Makeup Effects occurred at Hammer Films in the mid-1950’s. Make-up wizard Phil Leakey was the first artist ever to be given on-screen credit for”Special Makeup Effects”. Using unusual chemicals and materials, Leakey strived to create greater realism in his fantastic effects and in so doing engineered the transition from science fiction to full colour, gory, gothic horror. In this lively documentary, Phil takes us back to the Brat Studio years, and explains how the effects were achieved for Stolen Face, The Quatermass Xperiment, Quatermass 2, X The Unknown, The Curse Of Frankenstein and Dracula.

“Hammer had no laboratories or ovens or anything to cook rubber prosthetics with. I had to take them home and do it. I used to ring up my wife and say: don’t cook anything tonight dear I’ll need the oven to bake a rubber head.” Phil Leakey

When Roy Ashton succeeded Phil Leakey as Hammer’s makeup supreme he was hailed as The King of Horror. In his tenure at Bray Roy helped Hammer consolidate their success as Horrormeisters creating the creatures the audiences love to see. When Roy passed away on January 10, 1995 he left behind an amazing collection of original sketches, paintings, test stills and tape recordings. This collection details his creation of the great Hammer monsters including: The Man Who Could Cheat Death,The Mummy, The Curse Of The Werewolf, Paranoiac, Evil Of Frankenstein, The Gorgon, Dracula Prince Of Darkness, Rasputin The Mad Monk and She.

“I believe that make-up artists are very underestimated on the whole. I will acknowledge a night or two without sleep to give expression to some of those curious and impossible situations which screenwriters airily described. I don’t look back in anger but more in amusement nowadays. I suppose to some degree I was fortunate in my time at Hammer. Toiling in ‘The Horror Factory’ brought me into contact with some of the most charming and accomplished ladies and gentlemen it has been my privilege to work with. To my delight their sense of the ridiculous was almost as great as my own. We had a lot of laughs in making these pictures and there is a continuing air of quality about them. Although they were done on very limited budgets, they were made by a team who really cared about what they were doing.” Roy Ashton

“Roy Ashton was a very nice man, again like Phil Leakey they were gentle souls. Very kind and well mannered and gentlemen. They were masters of their craft. They Always made you feel good, always made you look good too!” Hazel Court

Together, these two great programmes provide a valuable and unique insight into the success and importance of what the world now calls Hammer Horror.

The purchase of the Ashton-Leakey Collection by the National Museum of Photography Film and Television was the first use of National Lottery funds for Film Heritage. The collection is the largest and most significant archive of Hammer production artefacts in the world. This DVD tells the human (and unhuman) story behind this marvellous and important collection.