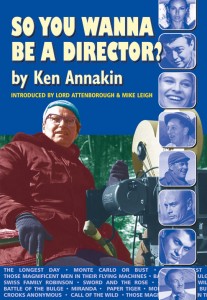 Anakin Skywalker? The name is George Lucas’s tribute to one of his favourite directors, Yorkshire-born Ken Annakin – one of THE international film directors of the post-war era. This is his story in his own words, delivered with the style and humour that have made so many of his films famous the world over.

Ken Annakin was one of the greatest international film directors. The last of the English directors to make it on the international arena (others included Hitchcock and Lean), this ‘no holds barred’ autobiography traces Annakin’s career from his early British films through to Hollywood. He has directed, written and produced over fifty feature films in Africa, India, Malaysia, Scandinavia, China, Europe and America. So You Wanna Be A Director? is an entertaining and witty travelogue, as well as an important document of film history.

Annakin’s films include: Swiss Family Robinson, The Longest Day, Battle of the Bulge, Those Magnificent Men in Their Flying Machines, Miranda as well as three of Disney’s greatest films.

Annakin’s book is forthright and pulls no punches. It has become a classic among directors’ autobiographies. Annakin details the dizzying heights and bleak lows of his career. This master of “family entertainment” sounds a loud clarion call for a return to motion pictures that are fun for all of the family.

Annakin Reviews and Endorsements
Ken Annakin was made one of the few “DISNEY LEGENDS” by the Disney organisation in March 2002. He is only the second film director to be so honoured.

So You Wanna be a Director? is recommended by Leonard Maltin in Playboy magazine – December 2001 as his Christmas purchase.

This really is THE film book par excellence. It contains countless behind-the-scenes anecdotes about Annakin’s films and the people he worked with, among them David Niven, Walt Disney and Raquel Welch. The kind of book that will have film fans devouring the pages, it is both humorous and candid. A joy to read, it delivers the goods in a spry and unpretentious style that is truly entertaining. *****
Howard Maxford, Film Review.

There has never been so vivid a portrait of a jobbing film-maker… A rousing autobiography.
Sight and Sound

Bloody entertaining! Annakin’s autobiography is something of a show-business rarity: He has a magnificent memory, recounts working with such industry giants as Walt Disney, Darryl Zanuck and Jack Warner, and isn’t shy about revealing indiscretions, propositions and dalliances, including his own.
Pittsburgh Post-Gazette

So You Wanna Be a Director is an entertaining autobiography through which seasoned directors and aspirants alike can enjoy and learn from a man with such a versatile and long-lived career…. If Annakin tells of his exasperation over trying to coax performances out of producers’ girlfriends, the bad behavior – and sometimes the drug problems – of certain stars, and the vagaries of international film financing, he’s providing tales that are as cautionary today as when he lived them.
Directors Guild of America Magazine

Ken Annakin pulls no punches in his disarmingly honest autobiography… he writes with almost embarrassing candour. The book isn’t merely a memoir. It’s also packed full of practical information and tips. He leaves nothing to the imagination.
Director Magazine

Annakin’s memoir is packed with clear-sighted wisdom that can only come from enduring so many thwarted projects, logistical nightmares and galloping egos.
Empire Magazine

You don’t have to take my word for his eminence – his new autobiography contains two forewords, one by Richard Attenborough, the other by Mike Leigh. His entertaining book “So You Wanna Be A Director? ” is out now, published by Tomahawk.
Andrew Collins – Back Row, BBC Radio

So many film autobiographies seem over-edited, with only people some twenty-something editor thinks are famous left in. Ken Annakin has no such agenda and is as happy writing about a prop man as he is about a star. It’s like listening to your favourite uncle reminisce about his life. And it’s fascinating.
This is a book that wannabe directors should read. Like Annakin’s career, it concentrates on the practical rather than the artistic side of the business. It makes a nice change from some of the more lurid memoirs around.
Britishpictures.com

As its straight-talking, informal title suggests, So You Wanna Be a Director? is an anecdote-packed, conversational autobiography that offers nuts-and-bolts information about the frustrations and rewards of being a commercial director along with bits of personal philosophy and celebrity gossip (Tony Curtis, star of Annakin’s Those Daring Young Men in Their Jaunty Jalopies, was “brittle, self-centered and a bully”).
The tone is that of a dedicated professional who views himself as a man enjoying “a Cloud Nine life with travel all over the world” rather than as a tortured artist whose life is completely defined by his work.
The book is almost a travelog, as the restlessness of Annakin’s young adulthood and the opportunities of his maturity take him to New Zealand, America, Monte Carlo, Ceylon, South Africa, the Swiss Alps and elsewhere. Along the way, he works or socializes with Peter Lorre, Carol Reed, Somerset ‘Willie’ Maugham, Alfred Hitchcock, Graham Greene, Walt Disney, Darryl F. Zanuck, Sir Alexander Korda, Aristotle Onassis, Claudette Colbert, Ursula Andress, Sylvia (Emmanuelle) Kristel, bad boy producer Bob Evans, a pot-smoking Robert Mitchum, Julie Christie (an Annakin discovery) and Princess Grace, to name a few.
John Beifuss, American syndicated columnist

So You Wanna be a Director? is a joy and a delight! Ken Annakin is an inspiration to us all, and long may this continue.    Mike Leigh

So You Wanna be a Director? provides behind-the-scenes accounts of nearly 50 movies, and is a joy from beginning to end.
Charles Bronson

Ken Annakin’s book about his most adventurous life gave me a lot of laughs as well as much to think about. It should be a “must” for every kind of reader!
Robert Wagner

Most people join the Navy to see the world. I joined Ken Annakin and climbed the Matterhorn, wrestled snakes, blew up pirates in the West Indies, and helped defeat the Third Reich in Battle of the Bulge. Through it all, Ken was our indefatigable general. In this book, he tells it all – and much, much more.
James McArthur

Ken Annakin is one of my favourite directors, and his book gives away all the secrets of making a great film.
Dorothy McGuire

Ken Annakin gave me my first film role. His autobiography evokes many happy memories of that very special period in the history of film, in which Ken played such a vital part.
Julie Christie

I have always eagerly anticipated the next Annakin production. This time, it’s his autobiography! Anyone who really wants to understand the joys and the agonies of making a movie will enjoy the vivid account Ken has set down in this captivating book.
Lord Richard Attenborough